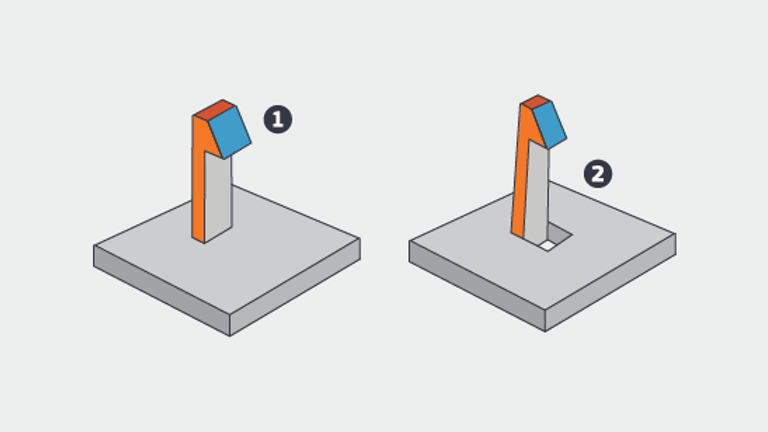 Undercuts are features on the injection moulded parts that prevent those components to eject out that were built without any damage. Undercuts can include cavities, holes, recessed areas or even prostrations in the parts where there isn’t perpendicular alignment to the parting line of the mould. The best method to eliminate the problem of undercuts is to simply not insert them in your design.

However, some parts require some design modifications. Some of the examples are:

In this post we will talk about six ways to sidestep injection moulding undercuts:

One of the easiest ways to deal with undercuts is to simply move the parting line of the mould such that an intersection is created between the two lines. Do you need a round or square standoff as locking or locating feature on the motor housing? The parting line could move because of the draft on the exterior of the part. You would be able to adjust the angles of the draft as it will help in intersecting the standoffs.

In certain cases, it is possible to deal with undercuts in this manner by making the parting line go zigzag so that every feature intersects. Although, parting line placement and mould orientation is dictated by material flow, part geometry and numerous other features.

Side actions are perfect for rigid materials like polycarbonate, nylon and acetal. Flexible or rubbery materials are not very good in this case because they will stick to the sides of the cylinder while retraction.

Bum offs can easily mould container caps, lens covers and other similar components. An insert is machined instead of side action to apply and bolt the undercut in the mould. At the time of the ejection, plastic material is compressed which ejects out the material from the undercut.

The bump needs to be well radiused and smooth. The material must also be flexible so that it can pass into the bump easily. Thermoplastic polyurethane (TPU), thermoplastic elastomer (TPE) and low-density polyethene (LDPE) are excellent options.

In this method, a metal piece is hand loaded in the cavity of the mould which prevents the plastic from flowing in these spaces. After completing the moulding cycle the inserts are taken out along with the part. An operator then picks them to reuse them again.

However, this takes a bit more time as compared to the side actions which runs automatically. Yet hand-loaded inserts are the better option for small scale production or prototypes. However, it is important for the technicians to handle the parts and the inserts by wearing gloves when they are hot.

In this undercut, parts are defined clearly. The components need to have sufficient angles to make sure that the ejection from the mould becomes easy. The thickness of the wall should be uniform. To support the flat areas ribs are used. It is also imperative to radius the internal corners whereas the thick parts should be cored out. Use fine finishes wherever required.

In a nutshell, it is important to think and discuss the long term plans of the product. This will help you to design the best-suited moulds for yourself. Besides, be aware of the effects that undercut have on the long term cost of products and mould investment.

How to hire the best truck rental while moving...

How to scale up your business amidst the talen...