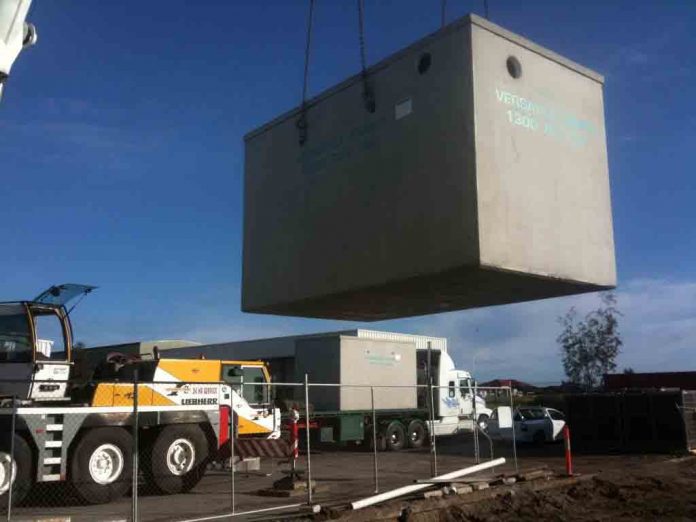 Water is an essential requirement for all kinds of life. It is crucial to supply potable water to every individual and community. As such, storage of water becomes an important issue. Water is typically stored in tanks like a circular or square water tank.

A structure that stores water is called a tank or reservoir. It can be built below or above the ground. Underground tanks are used to store huge quantities of water, while overhead tanks store lesser amounts of water.

Concrete tanks are a popular option in rural, semi-urban and urban areas. They suit underground and above-ground installation and can be delivered in complete form or poured onsite at one’s property.

Pre-made concrete tanks
These are concrete tanks that are delivered in a total form, craned away to a truck and placed above a prepared base of compacted sand or crusher dust that are stabilized surrounding the edges.

Pre-made tanks made of concrete are available in 1 to 3 pieces. 2-piece tanks are made of 2 cups, one inverted above the other. 3-piece tanks are similar but feature a ring section in the middle.

Based on the kind of manufacture, sections of the pre-made tank might be sealed together in different ways. In the case of some models, a sealing ring fashioned out of synthetic material or rubber is placed in the groove of the lower cup using sealant before the top half is placed on it. The inside of the tank is secured with sealant to stop the leak of water.

Concrete tanks poured outside
Mostly, concrete tanks are poured onsite at one’s property. A steel mould is used in which reinforcing steel is kept before pouring in concrete. The steel formwork is removed, and the finished tank is revealed.

Option of underground tanks
Concrete tanks are typically the most affordable option for underground tanks. When they are covered with load-bearing lids, they may be fitted below driveways or other structures. This renders them an especially popular option for urban areas and buildings with limited space.

If space is a major concern and one wants to store a huge amount of water, underground tanks are the ideal choice. The most common complaint against concrete tanks is cracking, but most manufacturers have tools and techniques to deal with such issues.

● Regulates temperature
When one is concerned about temperature, note that an above-ground metal or plastic tank becomes very hot in summer and freezes in winter. But by making use of an underground concrete water tank, one will keep water at a cool and regulated temperature.

The ground surrounding a tank insulates the tank from extremes of temperature. Concrete by nature is cool to touch, serving as inherent refrigeration for whatever one stores in the tank.

● Durable and less expensive
Though concrete tanks are tough to set up, they will be typically one’s cheapest option. Some experts hold the view that concrete tanks last only for a few years, but it is well known that they will last for a few decades, like 50 years, with proper maintenance.

Businesses and homeowners across Australia are able to still find disused and old concrete cisterns and upgrade them to fully functional tanks. For full exploitation of new concrete water tanks, use a tank liner made of PVC to protect the sides.

● Versatility
One can use concrete tanks to store anything except materials that corrode concrete. Whether the use is for storing wastewater or potable water, or rainwater, it can be handled by a concrete tank. Only note that one must not use the tank to store potable water if it has previously stored wastewater.

In case one is concerned about corrosion, offer protection using a tank liner. Liners protect concrete tanks from damage to quality much early and serve to prevent cracks and leaks. If a concrete tank suffers structural damage, it can prove catastrophic. But a tank liner will help protect the integrity of the tank by preventing water from touching the sides of the tank.

● Shapes and sizes
More and more companies are making precast concrete tanks in various sizes and shapes, such as rectangular ones which fit well under driveways. It is also possible to cast underground tanks on site. The majority of concrete tanks, which are either built on-site or pre-cast, are designed to be capable of bearing loads and suit placement under driveways. Rectangular concrete tanks are preferable to round ones as they are space-saving.

● Quality of water
Certain old concrete tanks might leach lime, boost the pH of the water and impact its taste. But such scenarios are rare, and mostly, the quality of water from concrete tanks is excellent. The latter tend to maintain a water cooler compared to other tanks, lowering any chance of bacterial growth.

● Environment friendly
Concrete is a natural material; it is hence a more environmentally friendly product compared to other kinds of tanks.

In sum, these are the top facts about concrete water tanks. One can choose from a circular to square water tank as per one’s needs.

How To Pick the Right Jewellery as Per Your Style

All You Have To Know About Ring Septum Piercing