Home > News > a unique musical instrument of the Xiyuan people

a unique musical instrument of the Xiyuan people 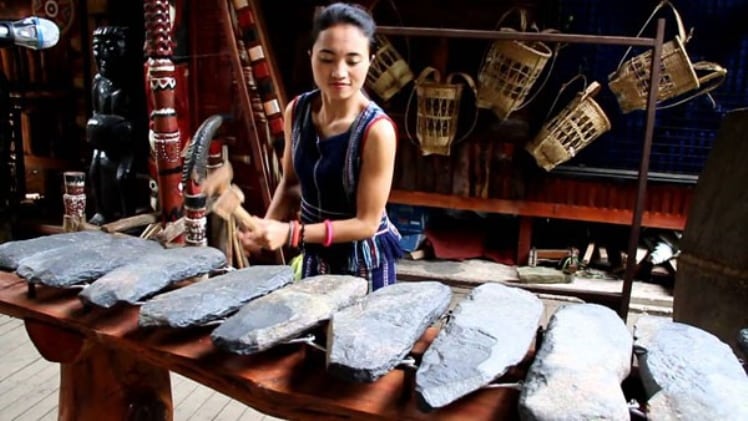 The sound of the stone piano maybe like the roaring of mountains and forests or the gurgling of streams. Or as the locals said, it is the spiritual comfort in their daily life, sometimes joyful and sometimes melancholy.

In 1949, a paving worker discovered a set of 11 pieces of natural stone, which were purposefully cut and arranged in different lengths and thicknesses, from large to small in Dak Lak Province, Xiyuan District. The French archaeologist Kong Duo, who works at the Bogu Institute in the Far East, sent the stone pieces to Paris for study and affirmed that they are different from the stone piano discovered in the scientific world. Currently, this stone piano is displayed in the French Museum of Humanity. Up to now, Shiqin researchers and collectors have discovered about 200 stone pieces used to make Shiqin in the southern provinces of Xiyuan. The famous ones are Qingshan Shiqin, Boai Shiqin, Susan Shiqin, and Pingduo Shiqin. After studying the shiqin found at the archaeological site of Pingduo, scientists said that the stone chips were used to make shiqin about 3000 years ago.

Fan Qingping, a cadre of the Khanh Hoa Provincial Museum, said: “Archaeologists say that Zhonghe Township, Qingshan County, Khanh Hoa Province, is a huge stone piano production base for primitive people. Researchers have discovered stones and many stone pieces in the cutting process.”

With their keen mind, strong musical perception ability, and creativity, various ethnic groups in the Xiyuan region have produced a set of simple shiqin, which reflects the harmony between man and nature and the conquest of nature.

The stone pieces used to make shiqin are called rocks and cornerstones. The method of cutting the stone chips is very particular, and each piece is different in length and thickness so that it can make a high-pitched or deep sound. Long, large, thick stone flakes generally sound low. Short, small, and thin have a clear voice.

On weekdays, people hide it in a large back basket and only take it out for performances on holidays. Because of its sacred meaning, it is the only musical instrument to be played on festivals such as the New Cooking Festival, the Harvest Festival, the Bull Stabbing Festival, and the Bamboo Pole Wine Festival. In the concept of Xiyuan people, Shiqin's voice is like a bond connecting people and gods, past and present.

The sound of shiqin in the festival is like the echo of the mountain forest, vivid, cheerful, and deep, sometimes with a sense of rhythm and an unspeakable melodiousness. When it is high-pitched, the sound of the piano is long and clear, and when it is low, it is like a sound coming from a rock wall.

In recent years, Shiqin researchers and collectors have also discovered more unique Shiqin, including those found in the Yangbei tourist area in Khanh Hoa Province. What is interesting is that this set of Shiqin has different heights and can play traditional and modern music and even foreign music works.

Natalie, a Russian tourist who visited the Yangbei tourist area, said: "I like your shiqin very much. I have been to many places, but this is the first time I have heard the sound of a very unique instrument. Russian music is so interesting. Shiqin's music draws us closer."

After thousands of years, although gongs have been changed to use gongs, the people of Xiyuan area still preserved the ancient shiqin. As the inheritance of national culture, the custom of percussion on the shiqin widely spread by local residents is still passed on from generation to generation.

Orefrontimaging - Interesting Facts About the ...

10 Mistakes To Avoid When Hiring An Independen...

Watermelon selling challenge: Watermelon as a ...