The Acer Swift 5 is a really thin and ultra-lightweight 14” laptop, and is one of the most portable laptops. In this review I’ll take a detailed look at this laptop specs, design, portability, etc. 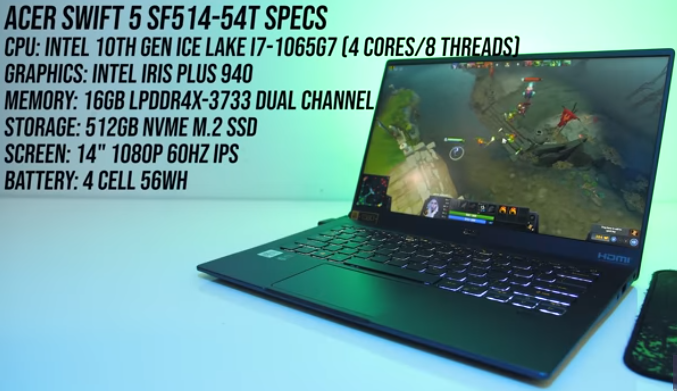 For the specs it has an Intel 10th gen Ice Lake i7-1065G7 quad core processor, which has Intel Iris Plus graphics, there’s no discrete GPU here.

There’s WiFi 6 and Bluetooth 5 for network connectivity, however it’s far too thin for an ethernet port.

The Swift 5 has a matte blue finish on top with gold Acer logo in the center. The interior has the same blue finish, and the keys have a similar gold. 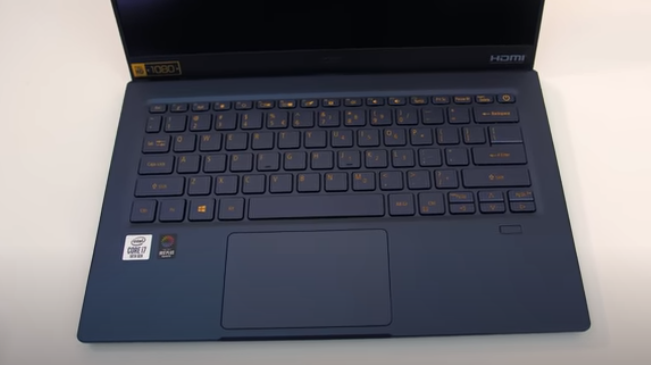 Overall the laptop felt pretty sturdy due to the metal build, and all corners and edges were rounded and smooth.

The weight is impressive, it comes in under a kilogram, or less than 2.1 pounds. With the small 65 watt power brick and cables for charging this rises to 1.2kg, so quite lightweight for travel.

It’s on the smaller side for a 14 inch machine and is also quite thin. This makes it a portable package, and means that the screen bezels are just 6mm on the sides.

Despite the smaller bezels, the 720p camera is found above the display, no Windows Hello support though.

The camera and microphone are both pretty average and typing on the keyboard isn’t too obtrusive. The keyboard has white backlighting which illuminates all keys and secondary key functions.

The brightness can be adjusted between two levels or turned off completely by using the F8 key.

I found the keyboard good to type with, however I wasn’t personally a fan of the small arrow keys, and as the power button is right above the backspace key you’ll probably want to change the settings in Windows so that a mispress doesn’t put it to sleep, which is the default..

The rear of the laptop raises up a little bit when you open the lid, which gives the keyboard an ever so slight incline.

desk, and with that combined with the super low weight I found that it very easy to slide

around on a flat surface, despite the rubber feet underneath.

There was some keyboard flex while pushing down hard, some would be due to the lift design as there are less contact points between it and the desk, however I never had an issue with this during normal use.

Screen flex also seemed pretty average, but it was hard to try and bend it without the machine sliding around for the reason just discussed.

The precision touchpad clicks down anywhere and worked well, I thought the size was decent considering the available space.

There’s a small fingerprint scanner to the right just below the arrow keys, I tried adding different fingers multiple times but never got it to properly recognize my fingers during the setup process, so I wasn’t able to test it out.

The 14” 1080p IPS touchscreen worked fine and the screen didn’t tilt back when pressing on it. 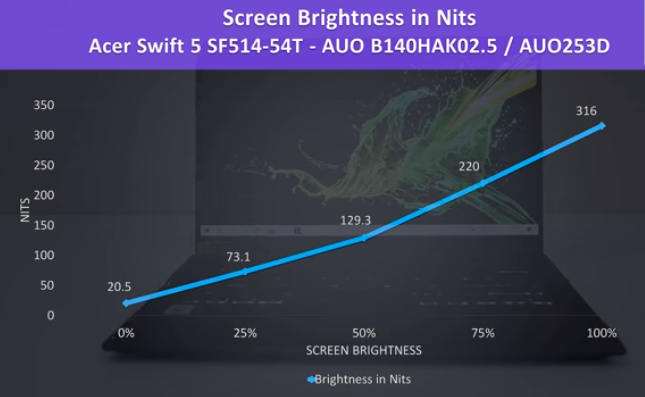 I’ve measured colour gamut with the Spyder 5, and got 99% of sRGB, 70% of NTSC, and 76% of AdobeRGB. At 100% brightness I measured 316 nits in the center with a 890:1 contrast ratio, so fair results, about average brightness and above average colours.

Backlight bleed was minimal in this worst case scenario, I never had any issues when viewing darker content, but this will vary between laptop and panel.

On the left from the back there’s the power input, HDMI output, the version wasn’t specified however I confirmed I could use a 4K monitor at 60Hz so it’s probably 2.0, USB 3.1 Gen1 Type-A port, and a USB 3.1 Gen2 Type-C port supporting DisplayPort, Thunderbolt 3, and I confirmed Type-C charging works too.

On the right from the front there’s a 3.5mm audio combo jack, USB 2.0 Type-A port, status LEDs and Kensington lock.

There’s nothing on the back other than some subtle swift branding, while the front just has a groove to help you open the lid.

Fingerprints and dirt show up on the matte finish, both on the interior and lid, however as a smooth surface it's easy to clean.

Underneath just has some air ventilation towards the back.

The Swift 5 is powered by a 4 cell 56wh battery. Despite not being that large, it lasted for almost 7 and a half hours when just watching YouTube with the screen on 50% brightness and keyboard lighting off, a great result when compared to others we’ve tested.

We didn’t bother testing the usual game we use for battery life though due to the Iris graphics.

The CPU temperature at idle was good, and even under this heavy load it was still fine, no thermal throttling. The clock speeds look low, however the i7-1065G7 operates at 1.3GHz base clock with a 15W TDP. The 3.9GHz speed listed on the spec sheet is only for brief single core turbo boosts.

Although definitely not a gaming laptop, the Intel Iris graphics should still be capable of some lightweight gaming.

We’ve tested these games at 900p with the lowest settings available. Dota 2 was easily playable without issue, Overwatch felt a bit stuttery, and the CS:GO results were lower, so those two would probably benefit more from a lower 720p resolution.

You can still play less demanding esports titles at lower settings on the Intel graphics, just be prepared to drop the resolution.

The good and bad aspects of the 10th gen Acer Swift 5 laptop.

Overall I thought the build quality was decent when you consider the smaller form factor.

Yes it does have some flex if you go out of your way to try and bend it, but it’s perfectly adequate during normal use and feels quite sturdy.

Even for a 14 inch laptop, the Swift 5 is on the smaller side, and at less than 1 kilogram, the weight is impressive if portability is your priority.

As you’d expect though, this does mean there’s less performance on offer compared to other larger options at this price point.

With the Swift 5, you’re absolutely paying extra to have such a thin, light and portable laptop. Some people, myself included, are happy to pay this price though, even if there are better performing options for less money if they come at the expense of heavier and thicker profiles.

I think the Swift 5 would be a good option for a business user that travels frequently with a laptop, but doesn’t need discrete graphics power.

The Ins and Outs of Online Safety...