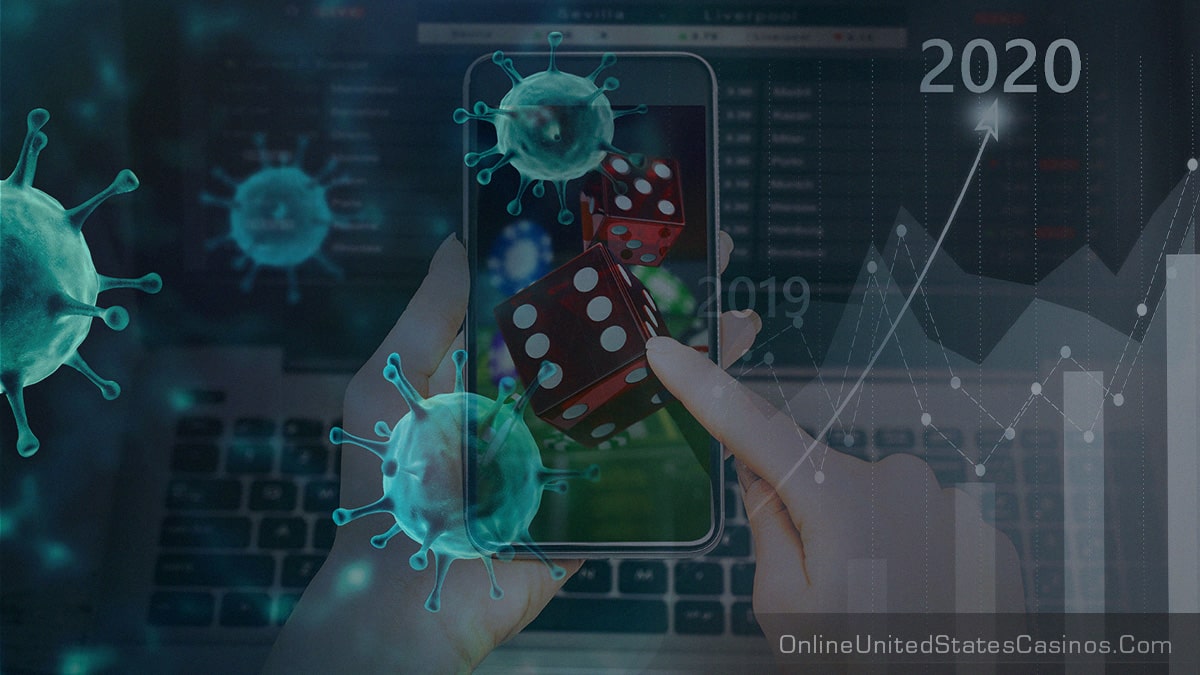 There is no doubt that the ongoing pandemic has severely impacted many industries, crippling some. While the gambling sector is amongst those most affected, due to the worldwide lockdowns, its digital segment has not only managed to maintain but has been thriving in this time of crisis. In 2020, online gambling operators saw a spike in user activity, as experts now predict a market size of $127 billion by 2027. A number that is above previous estimations and close to double the current market size.

As land-based establishments ceased operations at the start of March, and in most regions remained closed at least until June, the sphere saw a noticeable shift from offline to online. As a response to this trend, many operators had to go digital and expand their gaming services by offering them online.

In March, in an unprecedented occurrence, sporting events suddenly ceased around the world. TV sports channels had to resort to buying the rights to air matches from leagues in countries that didn’t impose restrictions and allowed teams to compete. For a short period, the Belarusian Premier Football League was the world’s most-watched championship, as it was the largest one active. That absence of activity and commerce hit bookmakers and bettors equally hard.

The American Gambling Association estimates that $150 billion in illegal bets get placed each year in the US, with most of them going to college and NFL football games. The figure often gets mentioned by lobbyists trying to push through sports betting laws. After 2018, when the Supreme Court struck down the Professional and Amateur Sports Protection Act, state laws now not only legalize sports wagering but allow for mobile wagering via apps. In August of 2020, Americans set an all-time single-month milestone with $2.1 billion wagered. Sportsbooks generated $119.4 million in revenues, 80% of which happened via online wagering. New Jersey sports numbers were up 31.5% as compared to the first eight months of 2019.

Zion Market Research indicates that betting on sporting events constitutes about 70% of the global gambling revenue, more than any other sector. European football leagues attract the most bettors, as 42.5% of Europeans who wager online do so on sports. Zion indicates that baseball is the second most popular to bet on in the world.

The Gibraltar-base betting juggernaut, 888 Holdings, released an announcement stating that it expects to see a 45% rise in revenues in 2020. It also noted that the company has managed to secure access agreements to roll-out digital sportsbooks in a trio of new US states. The company remains very optimistic about its sports site, given the positive signs about potential new regulations in Germany and other currently restricted markets. British operator GVC Holdings also noted an increase of 19% in online figures for the first half of the year, despite overall numbers going down.

Newzoo believes that global eSports revenues hovered around $1.1 billion in 2020, representing a 15.7% year-on-year growth compared to 2019.

According to a Concordia University article, the mentioned migration will result in a 13.2% increase in online gambling revenues for 2020. The article cites a ResearchAndMarkets.com report for this estimate. The current market size is $66 billion.

In 2018, the American Gaming Association noted that there are more than 2,800 active betting sites. In February of this year, they all saw a significant rise in traffic, particularly online poker platforms, as revealed by the online gambling review hub OnlineUnitedStatesCasinos.com. Many are now predicting that a second poker boom may be on the horizon, as Global Poker says that the number of first-time US player signups has gone up by 255% since the lockdowns started. Online casinos also continue to get a foothold in the US, as more states are now open to pass legislation making these platforms legal in search of new tax influxes. Canadian operators report that the internet casino sector grew by 77% over the same period last year.

In New Jersey, the DGE reports that online gambling revenues have grown every month in 2020, including an 87% increase in November. Year-to-date, internet gaming has managed to generate more than $870 million in the Garden State, a 101% increase over 2019. Pennsylvania online casino and poker operators are also setting records, with casino sites bringing in a combined $57.3 million in October and poker ones adding $2.4 million. Both numbers are up from previous months.

In Europe, the same trend is visible. Italy reports a 123% increase in revenues stemming from online poker tournaments and 89% from cash games. Consultancy company, Ficom Leisure, claims that the iGaming sphere in Italy grew by 25.4% this year. Figures from the Spanish Regulator Directorate General state that numbers are also up in Spain, rising by 18% in the second quarter of 2020. In its bi-annual industry statistics report, the UK Gambling Commission stated that online gambling activity is up 8.1% in the four-country union. The whole European industry should see a compound annual growth rate of 9.2% in the next five years.

South America is a booming market, with countries like Argentina, Brazil, Colombia, Chile, and Peru at the front. However, the activity is not regulated in all South American countries, even though 75% of the region’s population can gamble. Thus, many people resort to playing at foreign sites. The same holds for residents of countries in Asia and Africa, most of which have either no regulation regarding wagering over the internet or explicitly forbid the activity. So, there is little information regarding these markets. Nonetheless, according to one report published at ResearchandMarkets.com, in 2020, digital betting in the Asia-Pacific region should grow at a rate of 7% per year until 2024.

Casinos, like venues in the leisure activity, entertainment, and hospitality industries, have also been negatively impacted by the novel coronavirus and government-imposed guidelines.

Asia-Pacific accounts for 38% of the global market, and Macau, the world’s largest gambling hub, expects to see revenues tank by 80% this year. In November, experts predicted that there would be a 65% decrease for that month as compared to 2019. However, the numbers came in at $845 million, or 70.5%, as the market continues to underperform. Many hope that Macau casinos have seen the worst of the damage and are on the road to recovery.

Las Vegas seems to be doing better than Macau, but that’s not saying much. The Nevada Gambling Commission release numbers, which showed that the state's casinos are bouncing back fast, as the monthly numbers show declines in revenues ranging between 18% and 36%. Things are not rosy, but analysts predict that by the end of 2021, things will get back to pre-pandemic levels. Some are a bit more pessimistic and believe that this won’t happen until 2023. Atlantic city numbers are down 21.5% from the same period last year.

Different company’s evaluations produce different results on account of the data and methodology used. Thus, it is hard to figure out whose estimates are correct. However, something that everyone can agree on, and which government commissions reports show, is that online gambling is on its way to become the norm, as there is a growing demand for mobile betting. Even though real-life venues are now incorporating mobile gadgets and cashless transactions, they cannot compete with the convenience provided by wagering apps.

These platforms aim to boost interaction and provide a more social experience. Habits attained during the current pandemic are likely to linger once the world gets over this crisis. Thus, online gambling revenues should rise by $27 billion in the next three years.

Tips To Learn Sewing For A Beginner

The Best Ways to Invest in Yourself