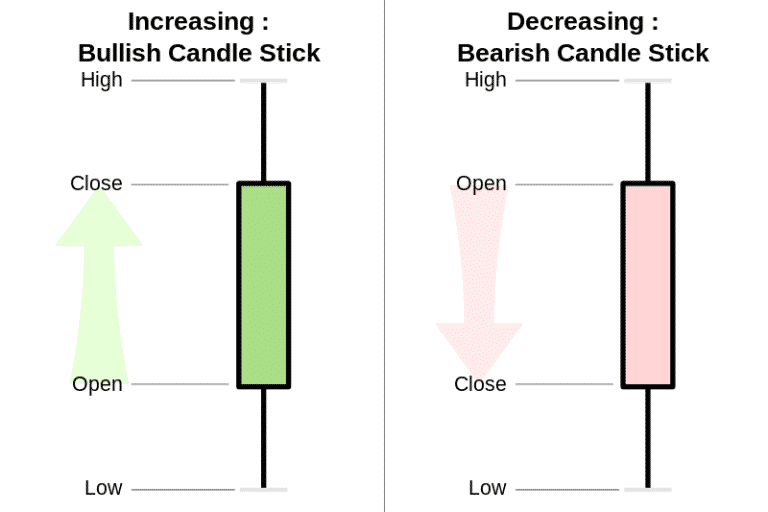 The candlestick is a representation of the price of an asset during a given period. In expert option, you can choose between a period of 5 seconds and 1 minute within which a candle will form. After the end of that specified period, another candle will begin to form and the process continues. There are basically two types of candles: bullish candles and bearish candles.

1. Hammer – A white candle made up of a short body and a long lower tail. Formed at the end of a downtrend. It shows that although there has been a selling pressure, a strong buying pressure is about to drive the price up. Consider buying!

2. Reverse Hammer – A white candlestick whose upper tail is long with only a very short lower tail. It is a reversed version of the first candle pattern, the Hammer. It shows that there was buying pressure that was intercepted by a selling pressure that was not strong enough for the price to continue falling. Therefore, the price will increase. Are you not going to buy?

3. Bullish Engulfing – A pattern made up of two candlesticks. A short blue candle that is fully enveloped or covered by a larger white candle. This is a sign that the price will potentially increase. Doesn’t that invite you to buy?

5 Morning Star – It’s a beacon of hope in a downtrend, hence the name. This is a three-candlestick pattern. A short body candle between a long blue and a long white candlestick. It shows that the selling pressure from the previous period is easing and the price increase is just around the corner.

6. Three White Soldiers – As the name implies, this is a three-candle pattern. Three consecutive white candles with small wicks. They open progressively higher than the previous one, whispering ” Buy ” into your ears!

1. Hanging Man – The bearish equivalent of the Hammer that occurs at the end of an uptrend. A blue candlestick with a short body and a long lower tail. It shows that there was a sell off during the uptrend, but buyers were able to stabilize the trend. That sell-off is a sign that buyers are losing control of the market. So, what do you hope happens next? You will do well to sell!

2. Shooting Star – The bearish equivalent of the reverse hammer formed at the end of an uptrend. A blue candlestick whose higher tail is long with only a short lower tail. Generally, the price will rise faster at the open before closing at a price just below the opening price like a star falling to the ground. Consider a sale!

3. Bearish Engulfing – A two-candle pattern at the end of an uptrend. The first candlestick has a small white body and is wrapped or covered by a long blue candle. This is a sign of a spike and a downward trend looming. The lower the blue candle, the stronger the trend! To sell.

4. Evening Star – Bearish equivalent of the morning star that occurs at the end of an uptrend. A short body candle is trapped between a long white candle and a long blue candle. It shows a trend reversal from an uptrend to a downtrend. A very strong downtrend is expected to happen if the blue candle moves lower than the first white candle!

5. Three Black Crows – Three consecutive blue candles with short tails or without tails. Each one opens at the same price as the previous one, but each close is pushed lower and lower. This indicates the beginning of a downtrend. To sell!!

6. Dark Cloud – A pattern of two Japanese candles. A blue candle opens above the previous white body and closes below its midpoint. He points out that selling pressure has taken hold of the market, causing the price to drop sharply. If the tails of the blue candle are short, it suggests a strong downtrend.