Centuries ago, someone accidentally stumbled upon the magical effect of applying heat to gemstones. Extremely high heat, such as that from a charcoal fire, can make a bland-looking gemstone change its colour into something spectacular.

If this technique was not discovered, there would be very few affordable gemstones of good colour on the market.

The heat treatment is considered to be a natural type of enhancement as it is a continuation of the processes that taking place in the earth when the gemstone was originally formed.

During treatment, the gemstone is heated to very high temperatures causing impurities, chemical elements, and other inclusions to reform themselves and change the colour of the gemstone.

This colour change may result in the gemstone being darker, lighter, more intense or of a different colour. An example of this will be the dissolving of rutile silk inclusions in blue sapphires, which improves both clarity and colour. This heat treatment is permanent and irreversible.

Another example is the ruby. This is a gemstone that is commonly heat treated. Only the finest and valuable rubies possessing the richest colours are not heat-treated.

Rubies are heated almost to their melting point, allowing the aluminium oxide in the Gemstone to reform, creating a new crystal structure. This allows the chromium in the gemstone to combine with different atoms, allowing for a better red hue.

The same applies to the type of sapphire known as gouda sapphire. These milky white sapphires turn blue and deem for many of the quality sapphires on today's market.

For gemstones that contain rutile needles, the needle margins may become diffuse. On rubies, inclusions that are glassy in appearance may be found, which are caused by borax-based substances used in the heat treatment process.

It's usually more difficult to find out if a gemstone has not been treated than if it has. Unadulterated gemstones can be harder to verify.

However, there are a couple of clues that can help. For example, a gemologist can examine the inner workings of the gemstone and study the inclusions for signs of heat treatment.

For example, if the gemstone has been treated, tiny inclusions such as small crystals will melt during the heat treatment process. Gemologists can easily see this by using a microscope, and an absence of such evidence could suggest an untreated gemstone.

Centuries ago, people sitting in front of charcoal fires were actually the first practitioners of the art of heat treatment. They use pieces of bamboo to blow air into glowing charcoal where a few gemstones were placed, in order to coax some new colours into their gemstones. 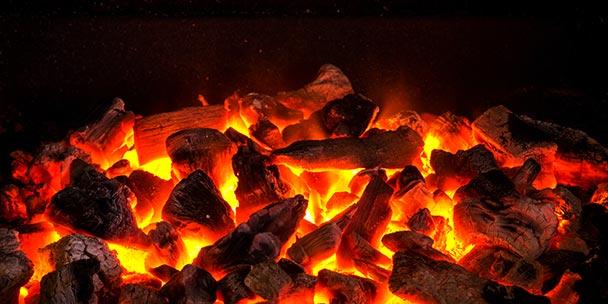 Today, the technology is much more advanced, with professionals using large computer-controlled electric furnaces. The crude, old methods are gone, but the result is still the same; drab gemstones are turned into something beautiful, allowing us all to have the chance to own a coloured gemstone that we can be proud to show.

Here is a full list of the most commonly heated gemstones and how heat treatment enhances them.

Tips for a Green New Year...