While there is a great fix between Android and Apple to decide which OS version will get the Winner’s title, this write-up will lead you through certain factors from which you can make a fair assumption.

With the adjacent release of iOS version 12 Beta 10 and Android Pie, the competition between them in regards to the high-end features are getting more intense. The end-users of both these OS platforms are more eager to announce their dedicated mobile OS to be the best in the market. But, on what basis?

Well, there are some features owned by each of the above-mentioned Operating Systems. These may help you get enough reasons pointing out how iOS app development is beneficial than Android. 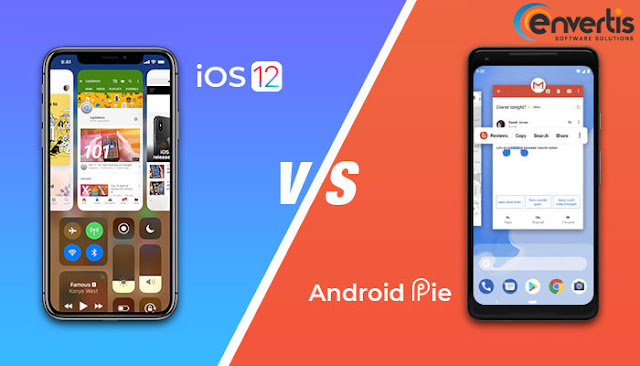 Starting with the gesture controls, Google has put a significant effect in improving the Android OS for its users. The end-users of Android must have experienced a developed gesture and notch to a remarkable extent.

However, Android platform has still not reached the point of providing 100% gestural as in the case of iOS 12, basically due to platform fragmentation. So, from that perspective, iOS seems to be at the former position than Android.

While comparing the two operating systems on the basis of Photo applications, iOS 12 again stands to be the better discovery than Android.

On one side, iOS 12 has come up with a new “For You” section, which allows users to access all favourite moments via Memories and shared iCloudalbums). Apart from that, it offers suggestions for sharing photos with friends and much more.

Whereas, on the other end, Google Photos offers the facility of any event, person or group-specific search suggestions. So, the app actually seems to limit your album exploration only to customised searches.

Although Android Pie seems to have incomparable features of Google Assistant, the inside story is quite different. While Google’s Android Pie is focusing on adding human-touch to the conversation, Apple’s Siri is now providing virtual voice assistance with real-time support.

With iOS 12 Beta 10, you can now get live Weather forecasts via Siri even when your phone’s screen is locked. This feature is supposed to be a great aid, especially in cases of natural catastrophes and emergency situations.

Furthermore, Siri facilitates you to configure your daily routines, and get much smoother and faster services. Whereas, in the case of Google Assistant, Android Pie has not yet developed many functionalities. So, Google Assistant works depending on the details that it knows about you. Well, you may think that only these two factors of Siri do not really prove that iOS 12 had beat Google Assistant. But for your information, this is just the beginning of a new phase of the competition. There are still more things about iOS 12 that will surely insist you to develop apps on this platform.

Augmented Reality is another factor that has increased the competition even more. Even though Apple and Google are astonishing us with their significant inventions- ARKit and ARCore respectively, there are some limitations to the later AR kit.

Apple is gaining wider user-base over the latest iOS Beta 10 version. It is because the AR gamer apps and tools provide more realistic images and videos by giving them a 3-D platform on screen.

There is a never-ending competition between iOS and Android, which is intensifying gradually with the release of superior updates. Still, if you look for a more secure OS platform, then Apple is the first and last preferred option.

If you already have an iDevice (iPhone or iPad) and want to customise your phone with apps based on iOS 12, contact Envertis today. This firm houses the best programmers for iOS app development, who can fulfil your demand at a favourable cost.

As you build your website , don’t forget to check out the security tips we’ve detailed out in our earlier blog,

“Tips And Benefits Of iOS App Development In Sydney”

6 reasons why your office should have a corporate gym

Why Hire a Web Design Company When You Can Do it Yourself?

How to Calculate the Price of a Timeshare

Consider This Before Looking For Employee Gifts

10 Life Insurance Facts that are a Must Know

How Expedited Freight Can Benefit Your Business