Home > Miscellaneous > Mysterious and beautiful: The Milky Way galaxy at its best

Mysterious and beautiful: The Milky Way galaxy at its best 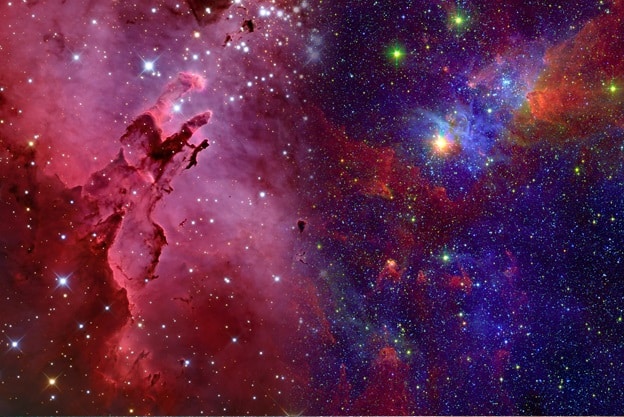 Is humanity able to see into the depths of the universe despite the imperfections of our senses? Moreover, nowadays you can even give a star from heaven naming a star as a gift after someone close to you.

When we look at the sky during a moonless night, we can easily see the bright streak across the sky. This is our galaxy - the Milky Way. This is what the ancients called it, and because there are billions of similar creatures in the Universe, we always write its name with a capital letter.

What is the Milky Way galaxy?

For thousands of years, the galaxy has been treated as a cloud, but in ancient Greece it was believed that it is a cluster of stars located very close to each other.

Already in antiquity, other galaxy-like objects were observed in the sky. They called them nebulae. In the Middle Ages, the nebula in the Andromeda constellation was known, in the middle of the 17th century Huygens discovered the nebula in Orion.  Further studies of the sky, especially after the use of photography, resulted in photos of thousands of galaxies.

It turned out that objects formerly called nebulae have very different structures. Some of them are clouds of gas found in our Galaxy (the Orion Nebula), others are true galaxies, or groups of stars, lying further away than any star in the Milky Way.

Researchers have gradually come to the conclusion that galaxies can have different structures and shapes. The general description contains three main types of galaxies: irregular, elliptical and spiral (the latter are the most numerous, about 80%). Barred spiral galaxies are an important subgroup.

You can ask: what does our galaxy look like? We see it in the sky in the form of a belt of stars separating into several arms. The problem is that we are inside of it. Can we see what the forest looks like when we are inside it? The nearest trees block our view and we do not know if in 100 m we will see a clearing, the end of the forest or a path.

Due to such problems, for decades we learned about the structure of galaxies even billions of light years.  If we look perpendicular to the surface of the disk, we can see its exact shape and structure. If we look in the plane of the galaxy's equator, we see a cross-section of the disk - a thick galaxy core and thin edges. The Andromeda galaxy is visible to an observer from Earth, obliquely, at an angle of approx. 77 ° to the axis of its disk. Although we knew the structure of other galaxies, we did not know the shape of our galaxies.

Moreover, where there is more gas, the radiation becomes more intense. Analysis of this radiation, involving different electromagnetic wavelengths, has led to the conclusion that our galaxy has a spiral form.

The diameter of the Milky Way galaxy disk is about 120,000 and a thickness of about 2-3 thousand light-years. The number of stars in the Galaxy has about 300 billion. Our solar system is slightly closer than 30,000 light-years from our galaxy and lies almost in the equatorial plane (only 20 light-years above this plane), the so-called Orion's arm. Of course, like the other stars in the Galaxy, the Sun and planets of the solar system orbit the center. The speed of the Sun in this orbit is approx. 270 km/s, which gives a period of orbit around the Milky Way galaxy center of over 200 million years.

What does the Milky Way galaxy consist of?

The galaxy includes not only stars, but also objects such as:

Open star clusters are relatively young stars. This is because the stars that form in the cluster gradually dissipate and, after several hundred million years, no longer form a structure distinct from their surroundings.

When we look at colorful pictures of nebulae, star clusters or galaxies, it is worth remembering that we will not see such an image even with the most powerful telescopes. Such pictures are often taken through filters to show the distribution of e.g. hydrogen or other gases. Areas with different temperatures are also given different colors - the coolest are often red, the slightly hotter - yellow, and the hotest - blue. However, this is not necessarily the case.

Such a star from the sky will be a unique gift and will show the recipient how dear you are. It can be a unique gift for a birth. The child will grow under the lucky star. Such a gift is a very personal gift that expresses a lot of feelings - buy a star today. Now you can look up at the sky and see the star on it that you named after someone you love. It is also a perfect gift for Valentine's Day and on the occasion of an engagement - buy a star and surprise your girlfriend with something so unique and romantic. Name one of the stars in the sky with the name of a loved one with cosmonova.org.