Home > Health & Fitness > Professional Teeth Whitening: Is it worth it and are there other alternatives?

Professional Teeth Whitening: Is it worth it and are there other alternatives? 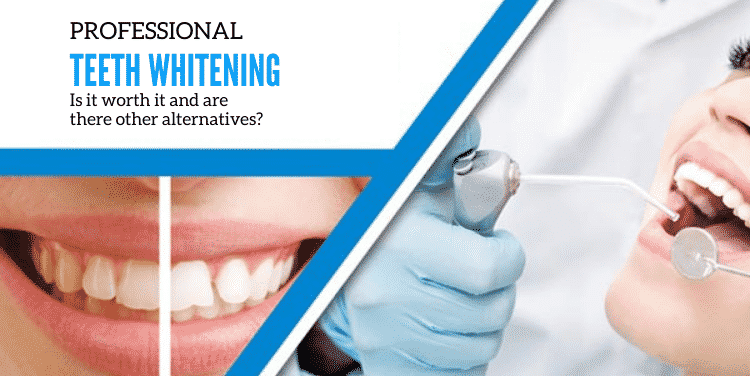 No one wants to be seen with dull, coffee-stained teeth and neither does anyone want to check themselves before they smile in public. Teeth whitening has been around for a while, and people can choose to get their teeth whitened professionally or at home using a DIY kit. Like most DIY operations, there is always some risk associated with it; however,this does not dispute that they are very effective, especially when you do it right.

Although more expensive than the home kits, getting professional teeth whitening is safer. This leaves us wondering if having your teeth whitened by a professional is worth the extra cash, or if we're better off doing it ourselves.

The teeth whitening procedure aims at brightening your teeth colour up to different shades depending on your choice and for the teeth to retain its natural luster and look. In professional teeth whitening, the whole process begins with the dental professional carrying out activities that will make your teeth easy to work with. Activities such as cleaning and removing plaques and tartar, and where applicable, fill up cavities and holes. All these preparatory activities are carried out before the day of the procedure itself.

When it comes to teeth whitening, hydrogen peroxide or carbamide is used. While home kits contain hydrogen peroxide in lower quantities, the dentist's peroxide amount is much higher. According to the ADA, the maximum percentage of peroxide recommended for teeth whitening should not exceed 10 percent.The over-the-counter kits contain about 6 percent peroxide while many gels in-home whitening trays contain about 22 percent peroxide. Furthermore, in professional teeth whitening, the percentage of peroxide in the bleaching agent is up to 35 percent, which is why only professionals can handle them.

Note that for a professional to use 35 percent product, it must only be left on for a specific period, which is rarely longer than an hour. Such a high percentage has high potency for causing sensitivity afterwards. Also note that using a bleaching agent with such a high percentage does not mean your teeth will get brighter, the strength only depends on how long it is used. For example, while a stronger percentage will be used for about an hour, another one of lower percentage might be used for hours, but the result will still be the same.

Laser lights are not really necessary

Professional teeth whitening often involves using UV or argon laser on the teeth afterwards. You might be wondering if this is necessary or is just a means of boosting the cost. A survey conducted in 2005 compared home whitening trays to professional teeth whitening. At the end of the two-week survey, the results were the same even when professionals used laser afterwards. The professionals were asked why they used laser at the end of the procedure, and some stated they used it because it came with the system. Others admitted to using the laser because the patient asked for it to be used, and some others claimed it was good for marketing. Bottom line, none of them used it because it was actually working.

Is professional service the best service?

You should note that you will get the same results from either a home kit or a professional service, the only difference is that one may be cheaper than the other, take longer than the other, and require more upkeep than the other. Also, note that effective teeth whitening depends on the teeth and not on the method or service. This means that while some teeth can brighten up in a matter of weeks, some teeth might take up to three months before it brightens up.

If you are residing in London and need a dental expert for teeth whitening, you can book an appointment to whiten your teeth professionally with us.

Camel Milk and Its Health Benefits...