Types and uses of pliers 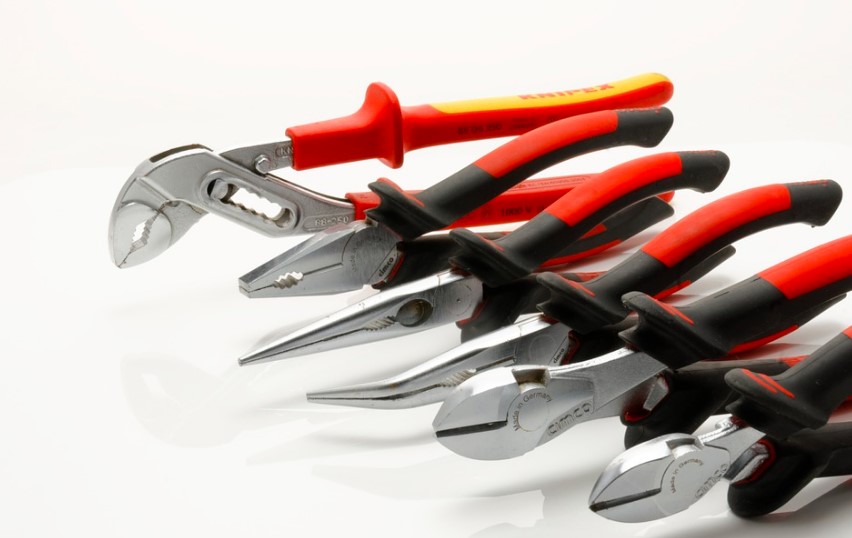 Pliers are very versatile tools that are used both to loosen, stretch and bend parts, as well as to cut a wire or strip a cable.

Pliers are divided into different types that, depending on their shape, allow you to perform certain tasks more easily i.e., precision cutters, stoke pliers, Pressure pliers, and Accu-cut and many others. In a toolbox you cannot miss universal pliers, with a built-in cutter; needle-nose pliers, to hold small parts or access the most hidden places; and adjustable pliers that can be adapted to objects of various sizes.

The universal pliers are, as its name suggests, a multipurpose tool. It is used to tighten and loosen, stretch and bend parts, cut a wire, or strip a cable. With short and fluted jaws, it has a robust clamp, to work on thick conductors and a cutting section.

The angled nose pliers also stand out for their many uses. It has sharply pointed jaws, allowing you to access small spaces and smaller parts and items. For this reason, it is widely used in electrical work.

Another very useful plier is the adjustable one since it has jaws adaptable to different sizes.

The cutting pliers are equipped with diagonally shaped jaws, very useful for sectioning cables, cutting wires, and other small-diameter pieces.

The stripping pliers also called stripping pliers, strip conductors of various sections thanks to the calibration of their cutting holes. In addition, it is used to cut and tighten the fins of the terminals.

If the work you want to do involves making rings at the ends of the connecting wires, the best option is to use round nose pliers. If you want to shape the terminals of the conductors that must be fixed with screws, you will have to opt for a pair of conical stem pliers.

Flat pliers or tweezers can be straight or curved. In both cases, they are used to manipulate small parts or to keep them immobile while welding.

Parrot-nosed pliers are also very useful for this last task. Widely used by plumbers, the length of its handles makes it possible to reach areas that are difficult to access. In addition, the grooves on the jaws facilitate the grip of the piece being removed, which may be rusted, especially if during the installation of the water pipes the joints were not protected by Teflon or tow.

Pliers are tools widely used in electrical and plumbing work, where they are used in a wide variety of tasks: from holding cables and shaping them, to tightening or loosening nuts or washers in places where fingers cannot access

If they are used to work under electrical voltage, the handles must be covered by an insulating material

In the shape of metal pliers, they are provided with two handles covered with an insulating material that allows their use in electrical tasks. In addition, they have a head equipped with two jaws, the shape and size of which may vary depending on the model.

To avoid accidents, quality pliers should always be used during their use and they should never be used with materials with a hardness greater than that specified by the manufacturer. If they are used to work under electrical voltage, the handles must be covered by an insulating material and the tool must bear the approval mark of the German VDE Institute, for compliance with the EN 60900 standard (insulated tools used for work at voltages of up to 1000 V in Alternating Current or 1500 V in Direct Current).

How does digital transformation influence the ...

11 Benefits of a Washing Machine...