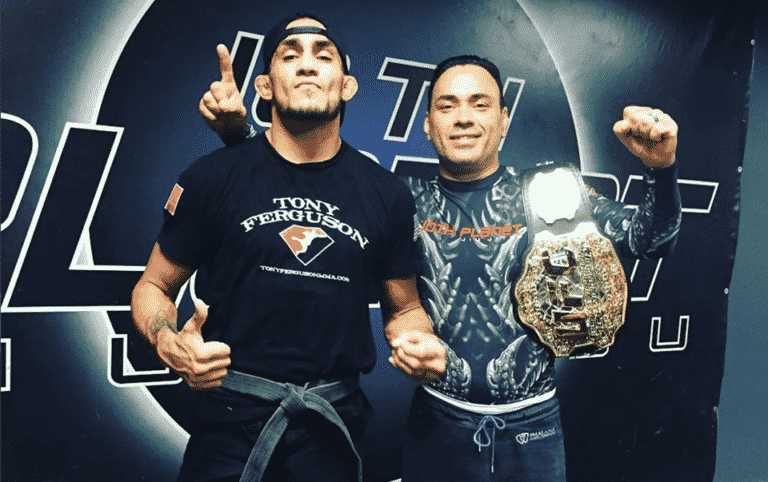 Brazilian Jiu-Jitsu (BJJ) is a martial art derived from traditional Japanese jujitsu (known today as judo) which is practiced mainly on the ground and whose objective is to obtain dominant positions, which make it possible to avoid taking hits and to control an opponent without hitting him, while having the advantage of being able to apply, if necessary, a submission technique, often associated with a joint key. Commonly nicknamed "the human chess game", Brazilian Jiu-Jitsu is a modern martial art which draws its quintessence from the mastery of the fundamental principles of levers. This allows a person of smaller size and strength to defeat an opponent with a larger size thanks to techniques that use the weight of the opponent as well as various lever mechanisms that require minimal force, being based on timing and execution of perfect technique. Strikes (kicks, punches, elbows,

A Brazilian Jiu-Jitsu fighter practices his art dressed in a Jiu-Jitsu gi (pronounced "gui") mistakenly called a kimono, although this is usual in common parlance.

Like its ancestor Judo, Brazilian Jiu-Jitsu has many similarities and someone who knows nothing could easily confuse them. In both cases, we find:

But then what is the difference between Judo

While Judo emphasizes throws to bring the opponent to the ground and immobilizations, BJJ primarily focuses on ground combat and submission by choke or joint key. In addition, only arm or elbow keys are allowed in Judo, while in Brazilian Jiu-Jitsu, each joint may be subject to a painful key.

The origins of Brazilian Jiu-Jitsu

In 1904, Mitsuyo Maeda, a talented disciple of the founding father of Judo, Jigoro Kano, went to the United States to promote his art and began there his professional career as a fighter, which he succeeded brilliantly. After several trips to Europe, Central America and Brazil, Maeda decided to settle permanently in Brazil in 1917. It was during this time that he taught Jiu-Jitsu (which was called Judo at that time) to Carlos Gracie, son of Gastao Gracie, to thank this influential businessman for helping him get established. After several years of learning, Carlos Gracie created a school of Jiu-Jitsu and taught it in turn to his brothers, except to Helio Gracie who had to be content to watch them and listen to the teaching because of his stature. brittle.

When Helio was 16, a student introduced himself to him in the absence of his brother Carlos. Helio therefore proposed to start the course using the techniques he had memorized. He thus begins Jiu-Jitsu and gradually modifies each technique to adapt it to his frail physique (5`5`` and 135 pounds), favoring technique, timing and leverage over brute force. It is the birth of Brazilian Jiu-Jitsu.

To promote Brazilian Jiu-Jitsu, Rorion Gracie, son of Helio, creates the famous Ultimate Fighting Championship. Before becoming the regulated competition it is today (time limit, weight category, anti-doping test, etc.), the UFC was first created to get closer to a real fight, a tournament of all styles and without distinction of weight in order to find the ultimate fighter. Surrounded by several martial arts champions of feet / fists (boxing, karate, kickboxing, etc.), Royce Gracie, son of Helio and representative of Brazilian Jiu-Jitsu acts as an outsider during the first confrontation. However, he ended up winning the tournament, marking the advent of Brazilian Jiu-Jitsu.

Royce will win the others too editions. Brazilian Jiu-Jitsu, a martial art still unknown in the United States, will take off. And with Royce's victories in the first editions of the UFC, the BJJ will continue to popularize. In addition to demonstrating the superiority of Brazilian Jiu-Jitsu over other martial arts, UFC and Royce Gracie helped revolutionize the practice of mixed martial arts by introducing ground combat. Today, all fighters in the UFC and other freestyle fighting competitions are followers of cross-training: they practice both a martial art of striking and an art of grappling like BJJ. Brazilian Jiu-jitsu is also the most popular ground combat sport among modern mixed martial arts athletes.

Do you know about the best BJJ fighter Eddie Bravo.  If you dont know just visit this website.