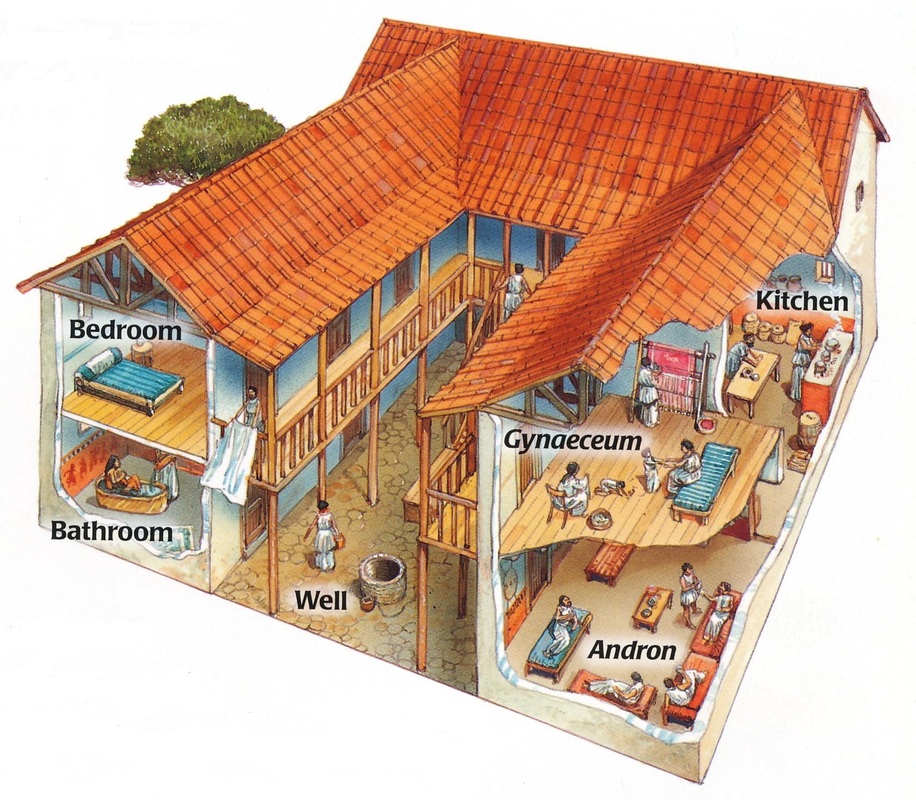 In ancient Greece, babies also had a hard time surviving. Since several babies died within the first few days of birth, names were not given to them until the seventh or tenth day. When a baby was born with a deformity, it was likely left on a cliff (female babies were abandoned more often than males). Abandoned babies were sometimes saved and raised as slaves by another family. To ensure straight and solid bodies, children in some Greek cities were covered in clothes until they were around two years old. Other city-states, such as Sparta, did not subject their children to this treatment. Greek houses had an outdoor courtyard in mind. The courtyard was like the heart of the structure. It had an altar for worshiping the gods, a well for drinking water,  and a safe spot for kids to play. The courtyard was surrounded by house rooms.. A workroom, a storeroom, and bedrooms were among the various rooms. The men of the house would usually hang out in a room, where they would entertain their male mates or business associates. This room had a different door on occasion so that passing man could not see the ladies of the home. Generally, the house women avoid men especially strangers.

The rest of their time was spent with their mother. They stayed in the house's women's section. Girls would undergo their entire schooling and training in the home with their mothers as they were being educated. Boys, on the other hand, may begin learning their father's trade or begin attending school at the age of seven. The city of Sparta took seven-year-old boys to the barracks and raised them. They underwent basic training and were not permitted to leave the barracks until they were thirty years old. Many toys that are similar to contemporary toys have been uncovered in archeological sites. Dolls, rattles, tops, swings, and a variety of other things were discovered. Richer households, as is customary today, had a wider range of toys, while poorer families were forced to work for the home at a much younger age. Greeks even had pets including sheep, goats, tortoises, and caged birds, according to evidence.

At the age of twelve or thirteen, girls reached puberty, at which stage they were considered adults and could marry. Girls took their childhood dolls to the Artemis temple and abandoned them there. This signified the culmination of their youth and the beginning of their adulthood. Women usually had children once they get married. The inability to produce offspring was regarded as a divine curse. Boys in many ancient Greek cities were expected to join the army at the age of eighteen and serve for two years. Males in many cities had to wait until they were thirty years old to engage in municipal politics. Food was sliced up before being eaten and people ate with their fingers. Women and men take their meals separately. Children were normally housed upstairs in the women's quarters alongside their mothers. If family-owned slaves, the slaves' duty was to serve food to the men first, then the ladies, and finally themselves. Women and children would cook the food if there were no slaves.

Richer people or on special occasions ate meat and seafood (including octopus), while the majority of people ate vegetables, grapes, honey, olives, eggs, figs, wine-soaked bread, nuts, cheese, and porridge. It was, on the whole, a very balanced diet. Because of the hot climate in Ancient Greece, people wore soft, loose clothes, often made of linen. Within the building, however, children are always found wearing none at all! When they reached school age, children wore clothing that was identical to those worn by adults. Generally, people wore two pieces of clothing a tunic as well as a cloak (called a himation). Women's tunics were mostly ankle-length, while men's clothing was usually knee-length. Button, lock, and brooch fasteners were important for keeping the garments in place. Children in many cities lived at home until they were seven years old. Boys were then sent to school to learn how to read and write and to learn that what does senorita mean? Math, astronomy, art, gymnastics, and musical instruments were also introduced to them. Since tuition was paid for by households, only boys whose families could afford it were eligible to attend. Instead, poorer boys learnt to work as artisans, merchants, or fishermen. Girls were taught in domestic matters while staying at home. They learnt to cook, weave clothes, and take care of the house. By the age of 13, several girls will be married. Few girls in wealthy families will learn a little reading and writing at home.

Playing games like marbles, basketball, or ball games is a common way for kids to pass the time. They used rag balls or pig bladders that had been inflated. Knucklebones was a common game in which small fragments made from a sheep's ankle bones were thrown in the air and caught in the hand to gain points. Puppets and dolls, hobby ponies, toy chariots, pull-along creatures on wheels, spinning tops, and even an early iteration of a yo-yo have all been discovered by archaeologists. Any children were also permitted to keep dogs or chickens as pets.

9 Professional ways to Get More Listeners on SoundCloud

The Microphone Features to Look for When Making Music

Binge-friendly apps that you should keep on your phone